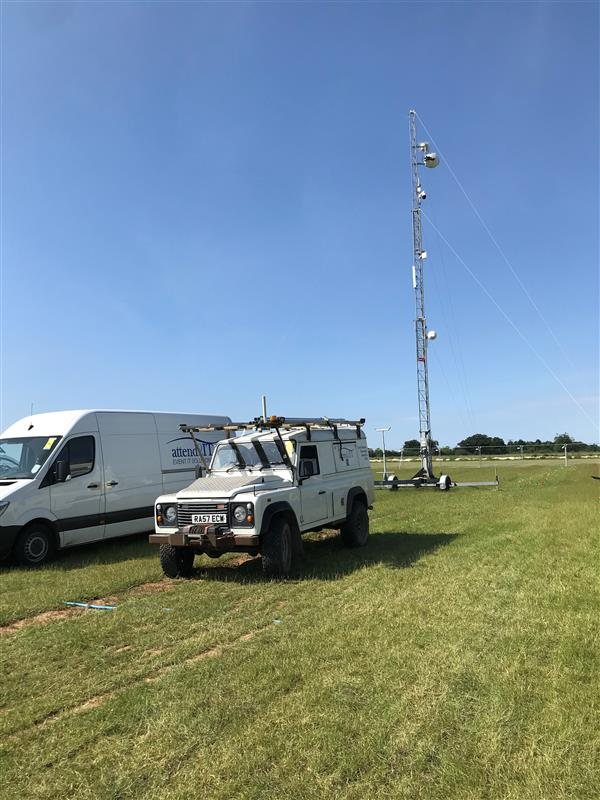 Internet connectivity is of the up most importance to the businesses attending for the promotion of the products and services they provide.   The event is based at a working arable farm and the core event spans 67 hectares, therefore, has no data infrastructure including a very limited 3G mobile phone service.

There are three separate requirements for the event

Due to the size of the event we would need to deliver enough reliable internet to the site. The obvious choice is to use multiple satellites as these are easy to deploy however these carry very high latencies and are unable to reliably pass VPN and other corporate traffic. For an event like this we only ever considered satellite as the emergency failover option. A 100Mb Leased service was brought to the site through Microwave point 2 point link.

There were two main visitor entrances which required a stable connection for PDQ Machines and for the ticketing company to handle registration of tickets. We built a dedicated link from our central mast directly to each gate, we then supplied the PDQ machines and gave them their own high priority network. We also setup and dedicated network for the ticketing company to use. As they were bringing their own servers and handling the internal addressing for their equipment we purely provided a clean network with an internet connection and SSID Handoff with their specified name so their devices could log on without having to be individually setup.

The cabins located around the site for the organisers, security, car parking and traffic/Police control cabins which all required both Wi-Fi and Telephones to allow internal and external calls to be made. We provided a dedicated link to each cabin to enable this functionality

Cereals is located in between two major roads and as such the impact from an event of this size requires careful planning and consideration to both the local residents and the impact on these major routes. With this in mind a traffic officer was required to monitor and control traffic at the three intersections around the site. In order to do this we provided three PTZ (Pan Tilt Zoom) dome cameras installed at these junctions some as far as 2 miles away from control. These linked directly to a control desk giving the operator the ability to monitor the traffic and reduce any congestion wherever possible. This footage was recorded and sent to the organiser post event for the purpose of dispute resolution.

A further suite of cameras are recorded for security and to ensure any incidents are documented for follow up after the event if required.  Both sets of cameras are also presented to event control to ensure they have as complete an overview of the event as possible.

We created a unified Wi-Fi network across the majority of the site which was centrally managed.

This allowed us to control the authentication of users and control how much data they were allowed, based on the package they had purchased.

We used a branded captive portal that allowed each user to use their pre-sent credentials to log on and activate their requested package, meaning each exhibitor only had one login for all of their devices. This stops extra devices from affecting the network, meaning if an exhibitor over subscribes their package they are the only ones affected and not the whole network. This maintains quality of service to the other exhibitors and the organiser’s requirements. An added benefit of this form of authentication meant that users could also roam anywhere on site and still use their packages.

We segregated the networks so the ticket gates, organisers, exhibitors and visitors could not affect each other. We did this to ensure ticket gate traffic was given the highest priority in the event of over subscription.

We created a guest network to offer the visitor the option of checking emails and to access social networks. This again used a branded captive portal page which the visitors would be greeted with, once accessing the network, at this point they could either enter a username and password which would activate service based on a coupon which could be purchased from an outlet or provided from the event sponsor for VIP’s. alternately they could purchase Wi-Fi direct through the portal by entering their payment card details. This would activate their service for the period of time they selected in the options. This proved to be very popular as the mobile phones networks collapsed during the busiest times.

This event doesn’t focus on selling products from the stand as in many trade events. However two exhibitors did choose to sell branded apparel from their stands. For this they would require the ability to make card payments. We supplied these exhibitors with a PDQ machine or a PayPal enabled tablet for electronic payments. These were placed on our high priority network and locked down so only encrypted transaction information could pass uninterrupted

Previous Case Study
Next Case Study
has been added to the cart. View Cart
×

× WhatsApp Us Available on SundayMondayTuesdayWednesdayThursdayFridaySaturday